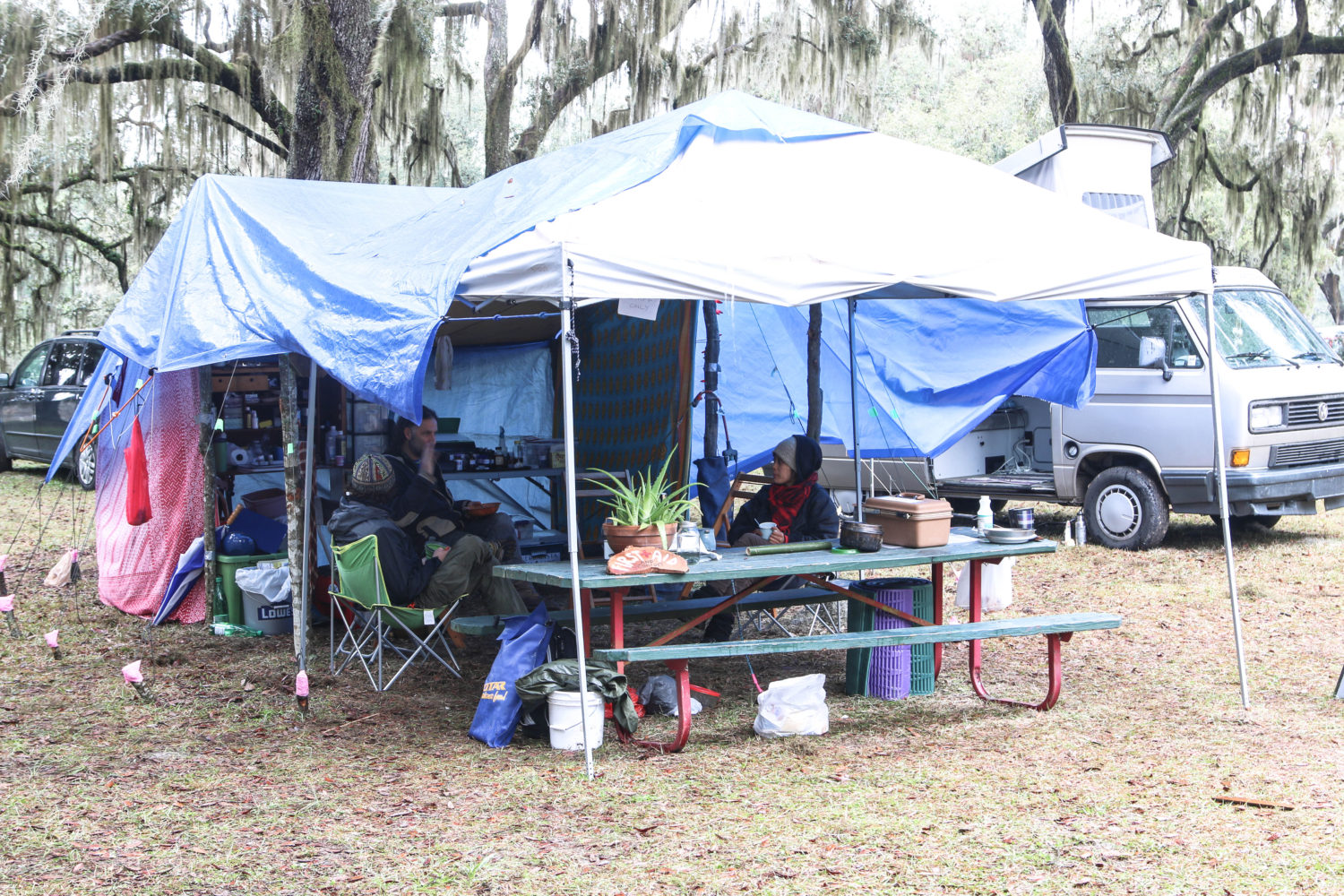 Before I go into some of the details here, I want to say that herbal first aid is much the same as all other first aid, the main difference is in some of the medicines dispensed. But the basics of sanitation, wound dressing and making the patient comfortable are similar. In this article the emphasis is on the pertinent parts of this first aid situation, there is a lot of background not covered.
(Please note; you can click on the photos to enlarge them)

This first aid problem happened at the Florida Earthskills Gathering. X had cut her finger with a small foldable saw. These types of wounds often create deep gashes and heal slowly due to the serrations of the saw. And due to the slow mending process from the laceration, it is important to look for, prevent and kill any possible infection.

The cut happened before the first aid station was set up.  I first saw her 4 days after the wound was inflicted. This was a deep and jagged gash on her pointer finger. At the time of the initial wound there were no first aid personnel and the patient was given numerous suggestions by the people around her. Not knowing which was the best choice, she tried a number of them. One of the treatments was putting bee’s wax directly on the laceration to prevent infection. The patient did not have an infection when I saw her, but the bee’s wax seemed like a bad idea as it trapped in water and created a waterlogged swollen finger impeding healing of the local tissue.

The first thing we did was to remove the wax and clean up and inspect the finger. While the tissue looked pretty torn up, it did not look infected and so the goal was to help prevent infection and mend the tissue.

The first day we cleaned it up well, scrubbing the beeswax and other plant residue to get a good view of the wound. We then put propolis on it as a disinfectant and wrapped it in a non-adhesive gauze pad. Then we put on a finger splint as it was near a joint and moving it would continually open it. Each time she came for treatment, she was given a few different internal medicines in tincture form. We would put each of these in a cup with water so it would be easier to take. To prevent infection we gave Echinacea (Echinacea purpurea) and Oregon graperoot (Berberis sp). For pain and relaxing she took a few nervines such as Skullcap (Scutellaria lateriflora), Valerian (Valeriana officinalis), Jamaican dogwood (Piscidia piscipula) and Passionflower (Passiflora incarnata). And after each time she was wrapped up, we gave her a to-go bottle of the above tinctures.

Day 2 we cleaned it up better (we had to stop the day before as the area was getting too sensitive to work on) and removed some dead tissue that was in the wound. Again we gave her dilute tincture of infection fighting and pain relieving herbs.  She had to shoot down of couple of these as debriding the tissue and cleaning it well is a painful process.

After removing the tissue the wound initially looked more intimidating but better to me, as the tissue was now red and suffuse with blood rather than the waterlogged tissue previously. Again propolis was put on as a disinfectant. And a cotton gauze pad was put on instead of a non-adhesive to help wick water from the local tissue.

Day 3 the wound looked better as the gauze had wicked away some of the water and the blood now coming into the area was helping the healing process. There were also less cracks around the wound. Less cleaning was necessary and we gave her the above medicines, wrapped it in gauze and splinted it up again.

Day 4 the wound continued to heal and fill in. The main difference was to remove the splint as the wound was healed enough where it wouldn’t easily open and her finger was getting stiff. While it hurt to bend, I helped curl it (ouch) as she held it in bent position for a few seconds. Again, propolis was placed on and the same internal medicines given.

Day 5 (the eighth after the incident happened) was the last day I saw the patient. It was looking much better though still painful. We got her to flex her finger a little more so it wouldn’t stiffen up to much, gave her some medicines and a wound kit to take with her. She had a good idea how to put the gauze and tape on as we showed her the process each day.

Our basic goal was to prevent infection and help the wound to mend. To do this we observed and cleaned it about twice a day. Externally we put propolis on to prevent infection. Internally we gave medicines for pain, relaxation and to prevent infection. We used a splint the first few days to help the tissue mend.
I would like to thank Susan Marynowski for all the hard work of setting up, supplying and working at the first aid station at the Florida Earthskills Gathering. I would also like to thank Lorna Mauney-Brodek for her excellent clinical and people skills and for bringing her herb bus and equipment to the Gathering. For more information-Florida Earthskills Gathering (www.floridaearthskills.org) and Lorna’s Herb Bus (www.herbalista.org). I would also like to thank X the Patient for putting up with me taking photos.

Thank you for reading this and I hope it was helpful. ~7Song

4 Responses to "First Aid for the Practicing Herbalist-Finger Wound"