While in Gainesville, Florida recently I gathered some Gelsemium sempervirens for medicine. Honestly, I have some from when I last gathered it in 1994 or so, but I like to sometimes wildcraft plants again to remember the specifics of gathering them.

Gelsemium has many common names generally alluding to its sweet (many would say overly sweet) floral fragrance. These include Jessamine and Yellow or Carolina jasmine (or jessamine). These names can be confusing as it is not related to the Jasmine plant (Jasminum species) commonly used for its fragrance. Gelsemium (my preferred common name to avoid confusion) is generally placed in the Loganiaceae family, though it also sometimes placed into the Gelsemiaceae.

This plant has a large natural range from Southeastern US to Central America. It is a vine and while it can be a bit weedy, I find it rather lovely, and glad to see and smell it when I occasionally visit Florida in February.

Gelsemium as Medicine
I have not used Gelsemium much for medicine yet, partly due to its toxicity. However, in the proper dosage, it has been used

to help reduce pain and I would like to learn how to use it this way.

The underground structures (rhizomes and roots) are the parts used as medicine. I tinctured them fresh at approximately 1:2 in 85% ethanol. The reason it is approximate is that I was flying home with the medicine, and to avoid adding too much weight to my already weighty baggage, I added just enough ethanol in the jar with the cut-up herb before leaving Florida to preserve it until I got home and add the rest of the alcohol.

You may notice that a number of plants that are used to help with pain are potentially dangerous, such as Atropa belladonna (Belladonna) and Aconitum columbianum (Monkshood, Aconite, or Wolfsbane). The reason for this is that plants affect neurotransmission, that is, the ability of the body to ‘talk to itself’ through the nervous system. And since the nervous system is involved with the transmission of pain signals, interrupting this pathway can help reduce pain. But this also disrupts the body’s ability to perform very important processes such as breathing. That is why you see respiratory failure as one of the common lethal affects of some of these plants. As an interesting historical note, it has also made them infamous as poisons.

So why use them at all? Because in first aid pain one of the most common problems (here I am referring to physical pain) and so any agent that can help with this situation is worth a consideration. Also, the dose is often well discussed in older herbals as well as current herbalists who use these plants. So gather it I did.

These notes were made while gathering Gelsemium near Gainesville, Florida. This is a very common plant and not threatened in anyway, so there is little worry about hurting the population. I would just avoid taking it from an area where the soil seems contaminated, or if someone is purposefully allowing the graceful vines to grow around their home. This plant grows in a number of soil types, though I looked for it growing in sand (common there) as it would be easier to dig out. The parts used for medicine are the underground structures, especially the rhizome, along with the roots. The rhizomes (a type of underground stem) grow somewhat horizontally and not too far below the soil surface. This is one of the ways that this vine spreads itself as it sprouts up from various places along the rhizome. Because it was not growing too deeply in the soil, I was often able to extricate it from the soil with just my hands pulling the rhizome and roots loose. There is a special ‘yanking’ technique for helping remove underground structures. The roots are often holding the plant fast in the ground and so you want to loosen them while not having the plant break off and then left with just a small piece. Instead, give firm pulls to the rhizome, so that it and the roots start to separate from the soil. This is the yanking part. This way, when you eventually pull even harder, more of the root and rhizome comes out.
One of the difficulties of gathering roots and rhizomes is deciding which is the one to plant you want to gather. This can become difficult, as there are a number of different roots in any given piece of earth. And there are also other vines tangled in with the Gelsemium, notably a number of Smilax species. There are a few ways to do this. First, find an area that only has Gelsemium growing as a vine, so as not to confuse it with the Smilax or other plants. Next, the first few times you gather it,

gently unwind the plant from the plant it is growing on so that you have the whole plant in your hand (as opposed to only having the root). This way it is obvious that it is attached to the right plant. And since Gelsemium has opposite leaves (as opposed to Smilax with alternate ones) it doesn’t have to be in flower. You may want to wear jeans or other heavy-duty clothing as you will likely be working around the thorny Smilax plants. I want to point out, however you gather this or any plant, you have to have properly identified it in the first place. There is no substitution for good botany skills here.
So, find a Gelsemium vine that is not entangled with other vines, and follow it down to where it meets the soil. Now with your hand, or using a hori hori, follow the rhizome under the soil, gently and firmly jerking it, so that it loosens from the dirt. And continue moving your hand along the rhizome to find and loosen more of the underground structure. In larger vines, the roots are thicker and will need to be dug out with a hori hori or other too. While I am doing this, I am using my pruners to separate the many vines that are attached to the rhizome to make removing it easier. One more notable feature of Gelsemium is that the rhizome and roots have a distinctive smell. I wouldn’t trust this alone to identify the roots, but it is helpful, and I like the smell. 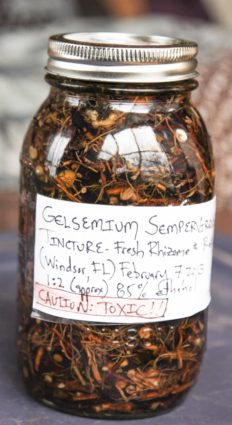 And so that is my Gelsemium wildcrafting and medicine making adventure. I hope you found it helpful, and I will post later as I learn to use this plant as medicine. ~7Song

Tips for Thanksgiving (or is it Black Fridaysgivin

Lavender-For Anxiety I have two related ways in wh

This dance video was made by the students of the N

Walk Like A Clinician-Nerve Pain One of the common