This group of plants are all in the Asteraceae (Composite or Sunflower family), the largest family of flowering plants. Within the Asteraceae, they are in the Eupatorieae tribe, a subgroup due the huge size of this plant family. And from here on in, it gets more confusing. At one point the genus Eupatorium comprised nearly 800 species, but the genus has since been broken up into a number of other smaller genera and work continues to be done on this genus and changes continue, leading to some complication. 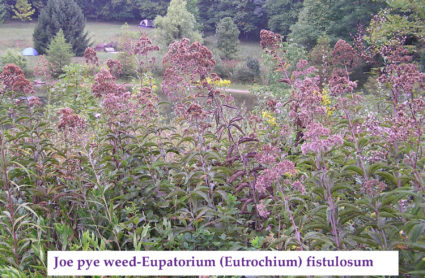 Common names can be confusing as they are often locale-based. Boneset seems to be a standard name for E. perfoliatum, so that one’s easy. Joe pye weeds sometimes have an additional word attached such as Sweet or Hollow joe pye weed (or just joe pye). Who is Joe Pye? I don’t know, but there are a couple of good stories about who he may be. Perhaps you can make up another and add it to the Joe Pye myth collection. Gravel root most likely has to do with these plants use for kidney stones, which are also called ‘gravel’. ‘Snakeroot’ is a common name for quite a few plants, often purportedly due to being antidote for snakebites.

Here are some of the key differences between the Eupatoriums in this article. I have adapted the keys from The Vascular Plants of Northeastern US and Adjacent Canada by Gleason and Cronquist, to simplify the technical language.

Below are a few important terms. Please also see the descriptive photos. 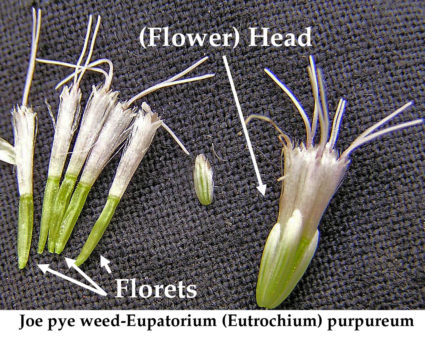 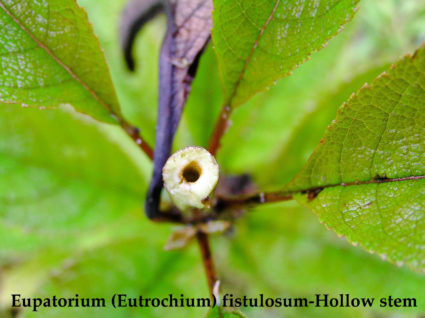 In Gray’s Manual of Botany it says this about E. purpureum-“bruised             fresh plant strongly vanilla-scented”. This is what probably gave this species the common name Sweet joe pye weed. It is also the one trait that was not apparent when I found this plant.

The genus Eupatorium is large and has been revised a number of times. Some species, such as Boneset (Eupatorium perfoliatum) have stayed within the genus while many others have been segregated out. The tall purple-flowered Joe pye weeds, have been changed twice recently from Eupatorium to Eupatoriadelphus and now seem settled into the genus Eutrochium. Other Eupatoriums have also been assigned different genera. Different authors have different opinions about this genus, so it is best to know past and current genera. One way to do that is to look at the synonym listing often accompanying a species from an online source such as The Flora of North America or Wikipedia.

Within this article, I have kept all the Eupatoriums together as a concept, but have listed their new genera as each species is discussed separately 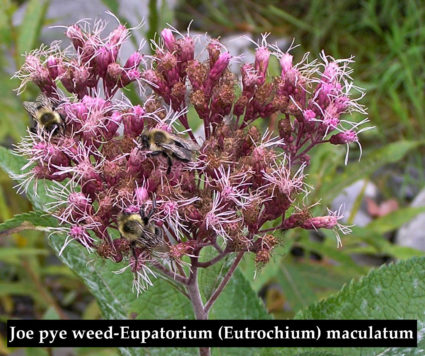 Something to consider about the different Gravel roots species as medicine is that while the Eclectic physician’s (a school of US doctor herbalists from about 1830-1910) mention E. purpureum but not E. maculatum or E. fistulosum, it could have to do with the botanical names of these species at the time. Both of these species were at one point considered subspecies of E. purpureum.
Within the older literature (such as King’s American Dispensatory, used by the Eclectic physician’s then and by herbalists today), there are many uses for this plant, including for pain in the urinary tract, incontinence, male and female reproductive issues, stomach disorders and a number of other health problems. But in general, herbalist’s today mainly use the roots for conditions relating to the urinary tract, especially as a diuretic and to help the passage of kidney stones. It is used as a tea and tincture for these conditions.

From a clinical standpoint, I am still learning about the how well they work in the above categories. I have used it for many years, generally with other herbs in diuretic formulas for prostatic conditions, urinary tract infections and for moving stones. In each one of these conditions, other plants were used as well (i.e., antimicrobials in UTI). Gravel root seems safe and I will continue to put it in these formulas, though it would be helpful to try it by itself to help quantify its efficiency.

At this pointing my practice I usually use E. purpureum as tincture and E. maculatum’s dried roots for tea. The reason for this is that I have enough of the ‘official’ species for tincture use, but have to gather fresh roots every few years. Since E. purpureum doesn’t grow around here, I use E. maculatum for this. 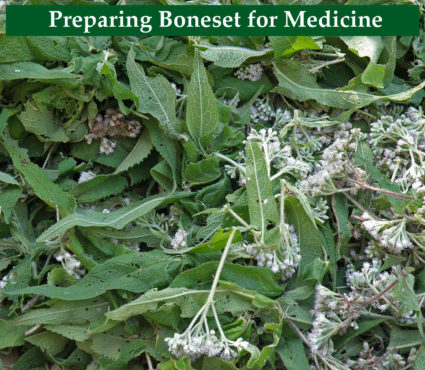 Boneset is easily identified apart from the Joe pye weeds (and most other plants) by the way the leaves are joined together around the stem.
This common wetland plant has a long rich history of medicinal use both in past and current practice. The leaves and flowers are taken as a tea or tincture, though it is quite bitter tasting. It is one of my favorite herbs for colds and influenza. It is relatively safe and a few good strong cups of the infusion or a dropperful or two of tincture every few hours can speed up the rate of recovery. Best to take it as soon as you feel the virus coming on (which is generally true for most medicines).

The Eclectic physician’s listed many uses for Boneset, including for “stomach disorders of the inebriate” but here is an important quote “In influenza it relieves the pain in the limbs and back. Its popular name, “boneset,” is derived from its well-known property of relieving the deepseated pains in the limbs which accompany this disorder, and colds and rheumatism”. 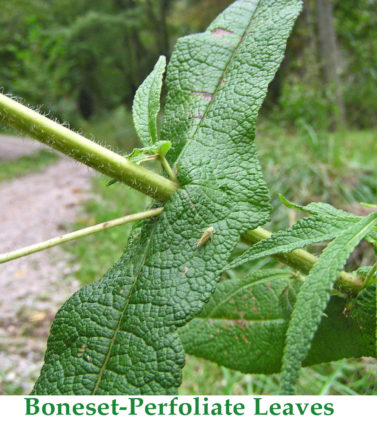 The reason I include the above quote because a common question is about whether Boneset can be used to mend broken bones, similar to Comfrey. While some herbalists do use it this way, it is more commonly used for viruses.  The name boneset is derived from two places. First, the leaves are attached in a way that some people see as a ‘doctrine of signatures’ suggesting that it can mend broken bones. The second, as in the above quote, is that Boneset has been used for viral infections which are often accompanied by bone and muscle pain, especially during a coughing fit. So by helping stop the virus, Boneset relieves this pain.
For anyone who lives around Boneset, I strongly suggest gathering a good amount of the leaves and unopened flower heads when you have the chance. They dry pretty easy and are helpful for respiratory viruses. They are also useful as a diaphoretic, to help bring on suppressed fever. (It is important to know when to break a fever versus when to suppress it). 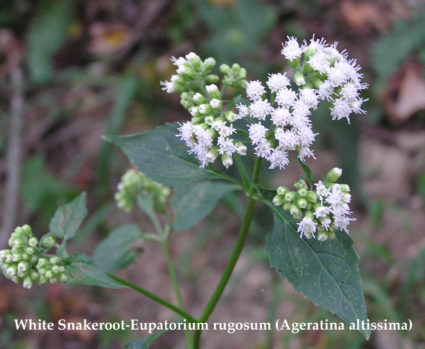 White snakeroot (Ageratina altissima, formerly Eupatorium rugosum) is mentioned here because of it poisonous infamy. And once again, there is some complexity with both its common and botanical names. There are many ‘snakeroots’, so it is important know which snakeroot one is handling. The botanical name was Eupatorium rugosum, which is still commonly used, though most newer field guides call it Ageratina altissima (I’m not sure why the species name was changed as well).
This plant is infamous for causing thousands of deaths of early colonists, as well as much livestock. This was especially true in the Ohio River Valley around the early to mid-1800’s.  In humans, the disease was eventually named ‘milk sickness’, in other animals ‘the trembles’. The cause of the illness was livestock ingestion of this plant, and if their milk was drunk, or the meat eaten, the poisonous chemical tremetol would be ingested, leading to the series of symptoms that was often fatal. There is a lot more to say about this disease, but I will leave it up to other sources (Wikipedia has a good write up) and this link (https://kb.osu.edu/dspace/bitstream/1811/1491/1/V06N04_463.pdf) which contains an interesting article written around the time people were afflicted with milk sickness.

This plant is common on the borders of the woods where the land has been disturbed. Sometimes it is a dominant plant there. It is the weediest of the plants mentioned here.

A Few Final Odds and Ends

All of these plants attract many butterflies and other insects. The next time you are near them when they are in flower, take a look in the flower head to see the diversity of the critters within.
Also, the Joe pye weed’s make lovely regal garden plants. If you have the right situation for them, they stand out nicely, but remember, they are big plants and need plenty of room. And remember all those butterflies they attract.

If you’ve made it this far, you should be considerably more informed about this group of plants. I hope that this information increases your admiration for these handsome, historically rich plants. 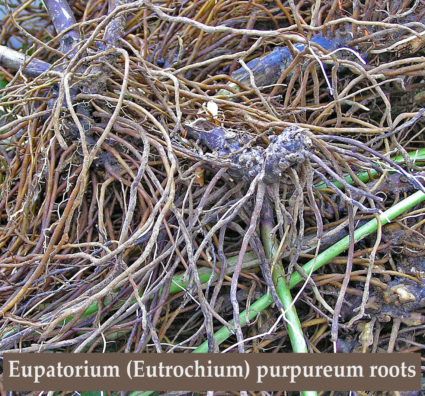 Recently, there has been a Red fox skulking around

A Tale of Youthful (slight) Recklessness, Fun and

Have you ever seen a Dandelion (or other plants) t

I find irony and humor useful coping mechanisms in