This blog highlights the genus Eupatorium. Why Eupatorium? First, there is a story involved (isn’t there always?). Second, I think the genus Eupatorium and the name changes it has gone through are useful teaching devices to learn more about botanical names. Third, to help sort out the medicinal actions of this group of plants. And lastly, they are handsome helpful common plants, a good one get to know better and appreciate.

For this article, I am going to focus on the Eupatorium species that are the most relevant to herbalists. They are
1. Boneset-Eupatorium perfoliatum
2. Joe pye weed-Eupatorium (Eutrochium) purpureum, E. maculatum, E. fistulosum
3. White snakeroot-Eupatorium rugosum (Ageratina altissima).

A note on the word Eupatorium. It comes from King Mithridates VI of Pontus, also known as Eupator Dionysius. He lived circa 120-63 BC and has a very colorful history. The reason he is brought up here is that he fits into the herbal world through a concoction (little used today) called Mithridate, which is a poison antidote. Here is a bit of his story. His father was also a king who was killed by poison (a popular method then), and so as he ascended the throne he naturally worried about a similar fate. He tried to tilt the odds in his favor by continually taking very small amounts of a number of poisons. And it was also rumored that he had a special concoction that was a mixture of many substances that he drank to become resistant to being poisoned. There is much speculation on what these substances were, and you can see competing accounts of the ingredients if you look it up. 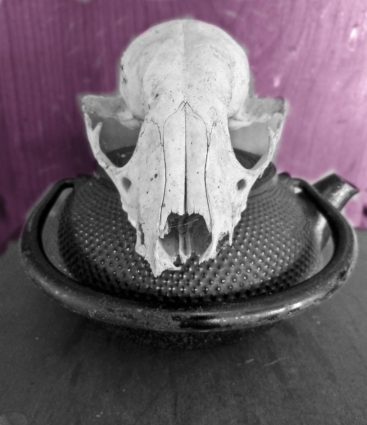 Here’s where it gets interesting (dare I say, ironic). Mithridates was a territory-expanding type of King, continually stepping on the toes of his Roman neighbors. When the Romans were sure to defeat Mithridates, instead of being captured he chose to kill himself, by poison. Unfortunately (get your ironic hats on) he was not able to kill himself as he was inured by all the years of taking sub-lethal doses of these poisons. (Not true for his family, who also took the poison before capture, they all died). So instead, he asked a guard to stab him to death with his sword. Not the cleanest way to die, but it worked well enough. And so, for many years afterwards, his special Mithridate formula was sought by those in similar circumstances (meaning, fear of being poisoned). Another variation of this drink (Galen wrote a book about it) is called theriac. Which lead later to the English word treacle.
It is hard to now how much of this tale, or formula are true, but it is well published, including accounts written around the time of his death.
I am not sure why this genus of these plants is named after him, but there are some poisonous Eupatoriums, such as White snakeroot (Eupatorium rugosum aka Ageratina altissima), so perhaps there was a poisonous species in his formula?
And so, Mithridate lends his name to a couple of plants

Here is the story behind my interest in these plants. It starts with Eupatorium purpureum, now Eutrochium purpureum. As someone who likes to be sure of a plant’s botanical identity (whether I am gathering it for medicine or not), I was reading up on the distinctions between the most commonly noted Gravel roots used in medicine, which are Eupatorium purpureum and Eupatorium maculatum. I also wanted to know about any similar looking plants so that included Eupatorium fistulosum. These are all commonly known as Joe pye weed.
It seemed that E. purpureum was a pretty common plant, and so with my field guides I began looking at these plants in my region and noticed right away that none of them fit the description of the ‘official’ species. I started asking knowledgeable folks and looking for drier habits it seemed to prefer, but just could not find it.

I hear folks occasionally call various Joe pye weeds, Eupatorium purpureum, which are not (see Botany section below). Sometimes I say something, sometimes not, to avoid being even more of a killjoy than I already can be. But what is apparent is that herbalists are sometimes gathering Eupatorium maculatum rather than E. purpureum.

This is not a debate about which one is a better medicine, as I am not sure how to judge that without using them both regularly and recording the results. In the older texts, Eupatorium purpureum is mentioned much more than the others, which is why I was looking for that species. There is more about this under ‘Medicinal Uses’ below.

This story now moves to the Ozarks where I was driving along a dirt back road with a couple of students. Now one thing I want to say about this part of the country is that in my short time there, I saw more unusual plants than I usually see elsewhere. Here is where there is Echinacea purpurea still growing wild, and I saw Polygala senega for my first time and came across Eryngium yuccifolium and Grindelia lanceolata. All interesting plants to me. And so my eyes were open for other unusual botanicals. And as we were driving along and cresting a hill there by roadside, bordering the woods, was a Eupatorium patch that looked like it should have been lower down near the streams.
And so I jumped out of the car, and began counting the florets; 7 in this one, 5 in that one, good so far. Then I started going to individual plants in the area and counting from different plants to make sure it was not an individual anomaly. Nope, the number of florets was consistent. Next, was the stem hollow? (Please don’t be hollow…). And sure enough, not hollow except a bit at the nodes. And the coloring, purple mainly at the nodes. Yes! After so after many years of counting florets and smelling crushed up leaves, here on this Ozark back road, was Eupatorium purpureum. And like other Joe pye weeds, full of butterflies and other insects.
I then spent some more time making sure it was the correct species, taking photos, and digging up some roots (it was a good sized stand and expanding).
And that is my Eupatorium purpureum story.

Recently, there has been a Red fox skulking around

A Tale of Youthful (slight) Recklessness, Fun and

Have you ever seen a Dandelion (or other plants) t

I find irony and humor useful coping mechanisms in